Sponsored by her Bermudian and American communities, Mwalimu was able to accept an Educator-in-Residence invitation by Bridge-to-Africa Connections, Inc.,  and Atasemanso R/C Primary School in Kumasi, Ghana.  A Citation from the school was presented to Mwalimu for her work with the students, faculty and community of Atasemanso, Kumasi in 2018.  The Citation also acknowledged the gifts of curriculum materials, school supplies, 52 desk/chair sets for two classrooms and African fabric  to beautify teacher desks, along with motivation posters for each classroom throughout the school. 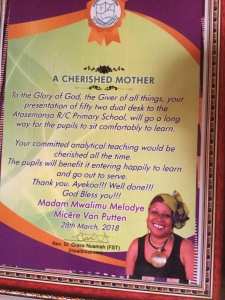 Temple University’s Temple Women’s Network featured Mwalimu in their Temple Spotlight, acknowledging and highlighting the accomplishments of a Temple Alum in February 2018. 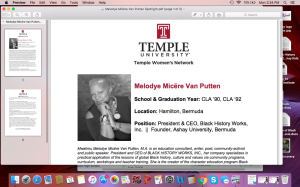 MMVP on the cover of JPAS, December 2015

In 2014, Van Putten was honored by the Bermuda National Library’s READ poster series.  Black History Workshops for Children and Mwalimu have been nationally recognized with citations and various academic and civic awards. 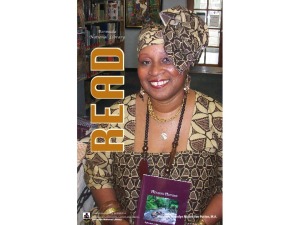 Mwalimu Van Putten celebrated twenty years of what she considers her life-work and was joined by former students, parents, teachers, supporters and colleagues from Philadelphia, PA, Charlotte, NC, Milwaukee, WI, West Palm Beach, FL and Bermuda at a gala celebration held in Philadelphia in 2006.  In 2017, her thirty year anniversary was observed in Bermuda at a gala celebration of Ashay University’s 5th Anniversary at the Bermuda Underwater Exploration Institute.  The gala weekend featured an elegant dinner-dance and hosted Rev. Dr. Nontombi Naomi Tutu, daughter of Archbishop Desmond Tutu, as the gala keynote speaker and weekend workshop leader. 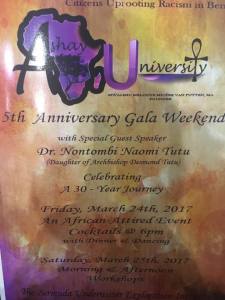 In 1989, TIME Magazine named Mwalimu a “Rising Star” for having created programs designed to educate, enlighten and edify people of African descent while simultaneously informing non-African people of the history, culture, struggles and achievements of the first peoples to live on the earth. 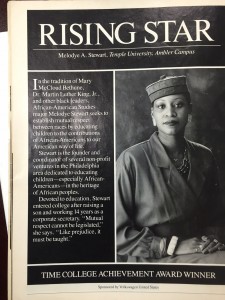 Other honors include Outstanding Young Woman of America (1990), The National Council of Black Studies (1991), and the National Association for the Advancement of Colored People (NAACP)’s Meritorious Service Award (1991).  Citations include the Pennsylvania House of Representatives (1989, 2001, 2006), the Pennsylvania Senate (1989) and The City Council of Philadelphia (1996, 2001, 2006). In 1996 and 2001, the Mayor of Philadelphia honored her work by decreeing, “Black History Workshops for Children Day in the City of Philadelphia.”  In 2002, 2004 and 2010, her work promoting Bermudian history and culture was recognized by Bermuda’s House of Parliament.  Numerous articles have been written about her work and she has been featured on a number of media platforms from television to radio. 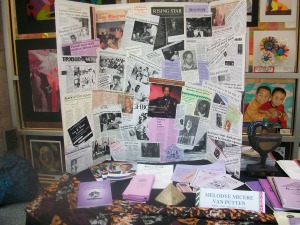 In 2017, Rev. Jamaine Tucker honored Mwalimu by quoting from her book Sacred Thoughts: God Is The Light… And The Light Is All There Is in the Prayer for Opening Parliment in Bermuda.  In 2018, she was asked to write a poetic offering for his ordination to the Anglican priesthood, delivered at the Holy Trinity Cathedral in Hamilton, Bermuda. 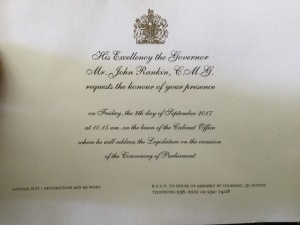 Invitation to the Opening of Parliment, 2017

Mwalimu was also invited to compose and deliver a poem at the Progressive Labour Party’s Gala Banquet in 2017.  Ode to the Throne Speech was published in Bermuda Real News online newspaper as a tribute to the goals of the newly elected government.

An award-winning poet, Van Putten’s Sacred Thoughts: God Is The Light… and The Light Is All There Is was an Award-Winning Finalist in 2013 for Prayers and Devotions (USA Books News).  Chronicling the election of President Barack Obama, her book Obamatyme: Election Poetry, won the 2009 Best Book Award for Urban Poetry (USA Book News). 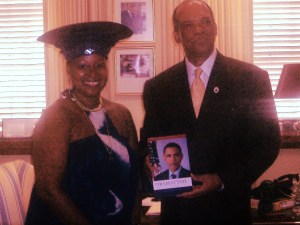