Africalogist Mwalimu Melodye Micëre Van Putten has been an education consultant, writer and lecturer for over thirty years.  Educated at Temple University in Philadelphia, Mwalimu was a Presidential Fellow.  She received a B.A. and M.A., and completed course work for a doctorate in African American Studies.  She is also certified in Multicultural Training and Education from Temple’s School of Social Work.

A dynamic speaker, Mwalimu has lectured in universities, consulted to school districts, conducted professional development for teachers and parent workshops, and designed and implemented Rites of Passage programs and community education programs for churches and civic organizations.  Mwalimu has researched and written two comprehensive teacher manuals and over two-dozen workbooks for children and adults.  She has worked as a talk radio commentator and a nationally syndicated columnist, and has been featured on numerous radio and television broadcasts.  Additionally, she is a published, award-winning poet.

As President and CEO of Black History Works, Inc., Mwalimu Van Putten is the creator and founder of a number of programs that promote knowledge of Black history and culture.  Black History Workshops for Children (BHWC), known in Bermuda as Ashay: Rites of Passage, is a character education program designed to expose children, ages 5-16, to the history and culture of global African peoples with the goal of developing self-esteem, motivation and pride.  The program was recently redesigned to be independently implemented as Ashay Clubs.  Four separate Ashay Clubs were initiated by parents and summer camps in Bermuda in 2014.  The Ashay Teen Summer Institute for teenagers encourages self-examination with a focus on values, goals and plans towards achievement.  Ashay University provides university-level adult education classes for busy professionals and is held at the Bermuda National Library.

Mwalimu Van Putten served as curriculum specialist with Khepera Charter School in Philadelphia, PA, from 2010 to 2012.  In consultation with teachers, she created an African-centered social studies curriculum for grades K-6, meeting the Pennsylvania Curriculum Standards while establishing African-Centered Curriculum Standards.  She also provided a series of teacher professional development sessions via her Ashay Training Manual for Teachers of African Centered Education.  Written to fill the gaps in teacher training, the manual facilitates effective teacher implementation of a culturally-relevant curriculum.

Black History Workshops for Children and Mwalimu have been nationally recognized with various academic and civic awards and citations.  In 1989 TIME Magazine named her a “Rising Star.”  Other honors include Outstanding Young Woman of America (1990), The National Council of Black Studies(1991), and the NAACP Meritorious Service Award (1991).  Citations include the Pennsylvania House of Representatives (1989, 2001, 2006), the Pennsylvania Senate (1989), and The City Council of Philadelphia (1996, 2001, 2006).  In 1996 and 2001, the Mayor of Philadelphia honored her work by decreeing, “Black History Workshops for Children Day in the City of Philadelphia.”  In 2014 Mwalimu was honored with having her image placed on the Bermuda National Library’s READ poster series.  She has been featured on numerous television and radio programs, most recently on Bermuda’s Public Television (CITV) conducting her Global African Inventions Program (2018).  The Bermuda National Library featured her on their BNL Social internet program in 2016:

In 1997 Mwalimu Van Putten was a featured speaker at the Million Woman March in Philadelphia.  In 2001 she accepted an invitation from Dr. Nontombi Naomi Tutu, daughter of Archbishop Desmond Tutu, to participate in a Women’s Retreat in South Africa.  In 2002, 2004 and 2010, her work promoting Bermudian history and culture was recognized by Bermuda’s House of Parliament.  In 2009 Mwalimu was invited to present at a Student Summit at the University of Dar es Salaam in The Republic of Tanzania, sponsored by the African Diaspora Heritage Trail Conference, where her African Foundation Timelinepresentation garnered a standing ovation.

In 2001 Mwalimu Van Putten took leave from her work in the United States to provide a one-year consultancy to the Ministry of Education in Bermuda, serving as Education Officer, Social Studies.  In that capacity she was responsible for managing the implementation of the social studies program for grades K-12 for the public school system of Bermuda.  She was also responsible for re-writing the social studies curriculum and providing teacher training to emphasize Bermudian Black history.  Her work with filmmaker Errol Williams resulted in a re-edit of his definitive film, When Voices Rise… Dismantling Segregation in a Polite Society, creating a school version and teacher study guide.

Additionally, she has been an adjunct professor at Johnson C. Smith University (NC), Winthrop University (SC), Temple University and Pierce College (PA). She has also been a keynote speaker and instructor at Bermuda College, and a speaker and workshop facilitator at the Women of Color Conference at the University of North Texas for eight of its ten years.

Through her poetry, Mwalimu continues her work of raising consciousness.  Her most recent book, I POET When I’m Full of Joy… and When I’m Rage-Full, Thinking Deep captures joy unbounded: touching the land of ancestors to gratitude for life’s divine unfolding.  It also expressess marrow-deep loss: the Charleston Massacre, tRump’s election debacle, police brutality, and more.  Sharing emotional poems of rage and loathing, joy and thankfulness, I POET implores readers to remember, get made, snatch joy, be inspired, think and act accordingly.

Rightings Arousing Conscious Empowerment – RACE: Poetry in the BLACK (2015) examines the history, looking for insights, encouraging robust dialogue and perhaps, suggesting strategies for community implementation. The poems are written to provoke deep thought, reflective moments, consciousness-pricking and a pathway towards Justice made reality.  Reviewed by Dr. David Hall, President of the University of the Virgin Islands, he writes, “Race: Poetry in the Black, is a living testament that creative ideas and poetic resistance… is still alive in the 21st century. …Read it and be reminded as to why “power concedes nothing without a poetic demand. Melodye Micëre Van Putten has eloquently demanded that we remember the struggle that ushered in our present reality, and embrace the challenges that speak so loudly to us today.”

More Sacred Thoughts: Standing in The Light (2014), is a continuation of Sacred Thoughts: God Is The Light… and The Light Is All There Is (2011), an award-winning finalist in the National Best Books Award for Prayers and Devotions (2013, USA).  It was reviewed Dr. Nontombi Naomi Tutu, who noted, “The poems serve to inspire, to comfort, to encourage.” Both books were published by Kephra Publications.  Another book, Soul Poems: Life as Fertile Ground, published by The Elevator Group (2009), was reviewed by the celebrated poet and founder of Third World Press, Dr. Haki Madhubuti.  He wrote, “Melodye Micëre speaks with a voice of authority and caring . . . This book is refreshing, thoughtful and welcoming.”

Mwalimu Van Putten’s book, Obamatyme: Election Poetry, also published by the Elevator Group, chronicled the election of President Barack Obama, and won the National Best Books Award for Urban Poetry (2009, USA).  It was reviewed by Dr. Cornel West who penned, “Melodye Micëre Van Putten is a talented poet whose love for truth and justice is quite evident in Obamatyme.”

MMVP at the Pan African Film Festival, Cannes, France, May 2015

Mwalimu Van Putten’s insightfully provocative book, Healing History: Reflections on Race and Forgiveness in Prose and Poetry, another Kephra Publications title, was chosen as the inaugural book club selection at the Bermuda National Library (2013).  A documentary film on Van Putten’s work in education and performance poetry, scheduled for release in 2015, takes its title from this book.  Healing History: The Documentary has been accepted by a number of film festivals, including the Pan African International Film Festival of Cannes, France.

The dramatic presentation Everything We Should Be, written and directed by Ms. Shalane Dill, is based on Mwalimu’s poetry and features several of her poems anchoring the story of a teacher exposing her students to Black history, only to be rebuffed by school administration.  Performed by senior school students of The Berkeley Institute in Bermuda, the play is like the poetry – riveting, provocative and powerful. 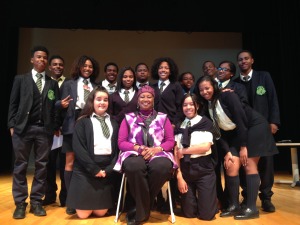 The Berkeley Players’ Everything We Should Be, 2015 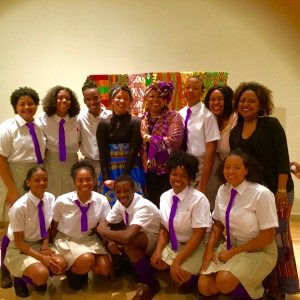 The Berkeley Players’ Everything We Should Be, 2018

Mwalimu Van Putten is married to Bermudian W. Carvel Van Putten, and divides her time between Philadelphia and Bermuda.  Believing that she is living her divinely ordered purpose, she says of herself –

I am a passionate, African-centered educator and poet, working on behalf of African people worldwide, to learn and understand what I call the “lessons of empowerment.”  These lessons emanate from our global African history and culture, struggles and achievements, and the shared destiny we have in the twenty-first century to rise from the ashes of a painful recent history and reclaim the glory of our ancient past.

My work is a journey that has taken me all over the United States and to countries in Africa and the Caribbean.  Writing is my muse; teaching, my reason for being on the planet.  My desire is to be of service, and to create programs and poetry that educate, empower and heal.